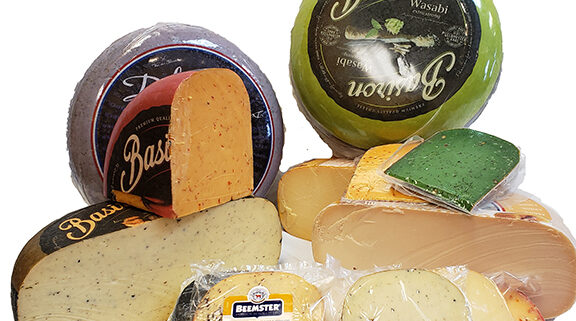 Having been referred to by name in historical texts as far back as 1184, Gouda is one of the oldest cheeses in the world that is still made today—and one of the most popularly enjoyed cheeses, worldwide. While the name ‘Gouda’ is now used as a fairly general term for a variety of similarly-styled cheeses from around the Globe: traditional Gouda originates in South Holland.

Since the Middle Ages, the name Gouda has encapsulated a traditional but relatively broad style of cheesmaking; like cheeses with the name ‘Cheddar’, Goudas vary considerably in terms of texture, flavour, and overall “strength” of taste—but share certain consistencies of production and presentation. Mild Goudas, as the name suggests, have a fairly mellow character and subtle flavour. Aged Goudas are ripened for a more considerable period of time than a Mild or Medium version. As such, they are firmer and drier, with a pleasantly caramelly sharpness and a more pronounced salt presence.