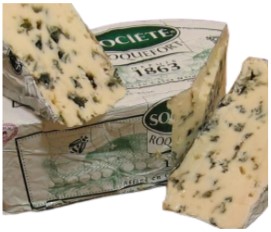 One of the world’s most famous blue cheeses: Roquefort Societe is produced exclusively in the South of France, according to a strict set of guidelines. Roquefort is a pale, creamy white with very pronounced veins blue-green Penicillium Roqueforti mold. The consistency is decadently creamy, with a high moisture content; the aroma is distinctly bready, slightly sour, and decidely rich—remeniscient of fresh buttermilk.

Although a relatively robust blue cheese, Roquefort is delicately ripened, finely crafted and lacks any harsh “barny” or “funky” characteristics which could otherwise deter one from other strong blue cheeses. The flavour is bold, distinctly “blue”, but balanced—expressing a harmonious balance of sweet, salty, and sharp flavours with a pleasantly fatty, slightly spicy finish.

Amongst other specifications, to receive the product name “Roquefort”—the cheese must be produced from whole, “raw” (not heated above 34°C) milk from lambs which have been let to graze at pasture, whenever possible, in the local area of Aveyron. Roquefort is aged exclusively in the naturally-formed Combalou caves of Roquefort-sur-Soulzon. The particular strain of mold which lends to Roquefort cheese its distinctive flavour can be found in the soil of the caves; historically, cheesemakers would leave bread in the caves, as a medium in which the naturally occuring spores could propagate to then be added to cheese. Nowadays: the mold is generally grown within a laboratory, solely from strains which originate in the actual caves.

Beverage pairings: Roquefort is classically paired with Sauternes but an Oloroso Sherry will draw out the natural sweet undertones of this cheese while standing up capably to its robust flavour.