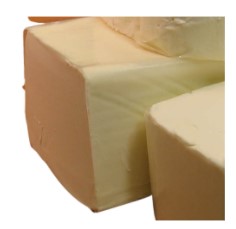 Referring to a category of cheeses made with a usually substantial addition of cream to the milk, and characterized by a very soft, often spreadable consistency, and rather mild flavour—cream cheeses are distinguished from other cheeses usually described as “creamy”, such as Brie or Camembert, by the lack of a rind, and because they are generally unaged and intended to be consumed without further ripening.

More comparable to fresh cheeses with a thick consistency and smooth texture, such as Mascarpone, cream cheeses are often used in similar applications. The decadently rich, somewhat sweet flavour of cream cheeses, make them a popular inclusion in a variety of desserts, as well as in pastries.

Cream cheese is also popularly enjoyed as a spread or “schmear”, a Yiddish name recalling its significance in Jewish-American cuisine, where it is classically enjoyed spread overtop a fresh or toasted bagel, often with the inclusion of lox (gravlax) and usually a selection of fresh and pickled vegetables and seasonings as topping.

Building on this pairing: other preparations of salmon, most notably smoked varieties, and other red or orange seafood are very commonly served with cream cheese, and oftentimes the addition of dill.