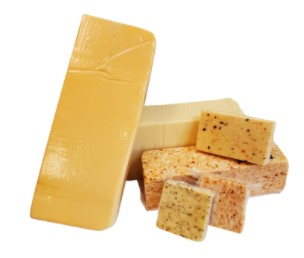 One of the oldest uniquely American cheeses, Monterey Jack originated as a mild white cheese produced by mid-to-late 18th Century Franciscan friars living in Monterey, Alta California, although nearly one hundred years passed before it came to be called by the name it currently bears. Ranchers in and around Monterey promptly replicated the cheese for their own home consumption, and the so-called ‘Monterey Cheese’ which became popular throughout California in the mid-to-late 1800s was a version thereof produced for commercial sale.

A vestige of Spanish rule in California, Monterey Jack cheese features prominently in Southwestern cuisine, and many iterations of Mexican-American cuisine, including Tex-Mex. It grates easily, has a mellow, slightly salty and somewhat sweet flavour, and produces a favourable melt—for which reason it is often used for topping nachos, melting in quesadillas, enchiladas, or bean and cheese burritos; or as a primary component of seven-layer dip or chile con queso.

From the 1770s onward: the area of the Southwestern United States now named California saw a great deal of immigration from Spain, particularly of cloistered monastic populations who not only founded Christian missions, but also brought with them a variety of artisanal crafts, including cheese making. The semi-hard, mild-tasting white cheese that the friars made became popular throughout the region, and was replicated by many of the Spanish-speaking ranchers in and around Monterey for home consumption.

The namesake of this cheese, one David Jacks, was a Scottish immigrant to America, who moved from New York to the new state of California during the 1849 Gold Rush. He promptly involved himself in the settlement of Mexican land claims there, and soon became the majority landowner in Monterey. Jacks was not an especially well regarded businessman; amongst other things (when Jacks first arrived in California, he had brought a stockpile of revolvers which he sold unreservedly to the “law-abiding and lawless alike”, and most of his land acquisition relied on loopholes to undermine the extant Mexican rancho which the US government had signed treaties promising to uphold) he was a very free lender of money and mortgages, but notoriously quick to foreclose. One of Jacks’s many controversial business dealings resulted in his ownership of one of the many local dairies which produced a version of the popular Franciscan white cheese. David Jacks was the first person to market the cheese commercially, and the most widely accepted etymology suggests that it was at this time the cheese received its proprietary eponym, which is still in use.